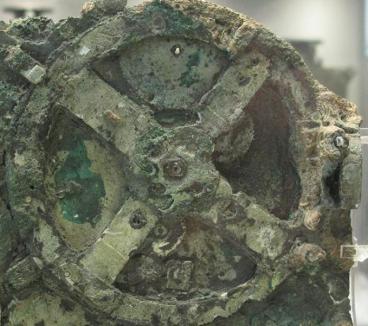 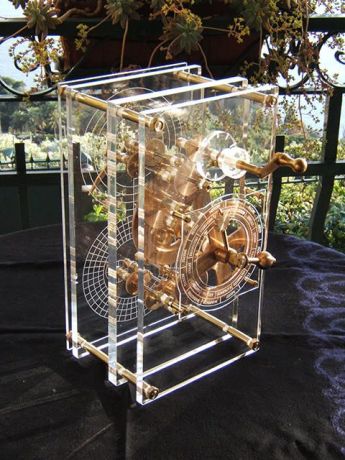 My first connection to this amazing work came in 1976 with marine explorer and famous world diver Jacques Cousteau and his team on British television. He had dived onto the wreak and found bronze cogs ,no doubt that once had been in this clock mechanism at one time before the ship sank. It awakened my interest in such as a mystery as to what this mechanism could be?

Scientist Richard Feynman visited the National Museum of Athens to see  this mechanism close up. He was not impressed with the museum set up but found the device amazing. He records it has cogs and drives and much like a modern mechanical clock work but has really well made slid rule type devices and some sort of mechanical set of mathematical gadgets . It could be the worlds first computer.

Trigonometry was invented by Hipparchus who was born in what today is Turkey in 190BC and taught school on the island of Rhodes. He was one of the first to have known that the earth ran around the sun. It is believed with some facts that indeed this man designed the mechanism we discuss. Who made it is the unknown factor. Greek writing seem instruction on what the device does. Two separate writing styles suggest that maybe it was made in a family shop of metal castings work. The bronze metal inscribed with writing should tell the whole story, yet we are still in the dark.

The fact that this mechanism is so advanced we now are aware that it is a 2000+ year old computer made in Greece and in the end being taken by Romans .The ship sank and all was lost to history. Or was it a gift for Julio Caesar whom in the first century would have had a  very ample celebration.Then all thought ships went from Greece to Rome but now new facts seem to point towards Turkey being the destination of the ship that sank.

It was first discovered by Greek sponge divers in 1900. The equipment made for deep sea diving  was primitive then and killed two men with the bends at 150 feet deep when first discovery caused panic. Later some 2 more divers left with paralysis from the bends.

Marcus Tullius Cicero who spoke of something called the planetarium”sphere of Archimedes “. He went on to say that it was able to display the sun. movements of the moon and planets even the movement of earth. We think he was talking of this same mechanism. Perhaps Cicero himself ordered the ship cargo that sank.

in 1974 Physicist and historian Derek de Solla Price worked on the Antikythera Mechanism until his death in 1983. He never had it worked out fully but so close his papers tell but if he did crack the puzzle he took that to his grave.

we can only guess how it worked and so an element of mystery remains in this case file.

My thoughts are this, perhaps the part that could be missing lays 150 deep on the ocean floor even now. A puzzle without all the parts may be why no one can fire it up and make it work. We know that it did so when made. My theory could even be right. Who knows?

I did enjoy looking back at this case as it is so exiting to think we had all that before Christ lived. why do we go backwards what happened to stop such progress is always interesting for me; at any rate. The craftsmanship of this work is beyond the date we know this was made. It must have been famous as Rome knew of its existence. Greeks told of it and now we have most of it to study more questions than answers appear. That shipwreck is so far down in the sea we need even now a major job to shift through sands and rocks that form the sea bottom all around that wreck. Then try to brig an old Roman vessel back to  us for anything that helps to solve the mystery of what is the worlds first computerized clock that may even record time.

Until the next time. Thank you all for your support. I may only hope that you enjoyed the account case as much as i did writing it for you.

Yours with great respect and faithful service, Sir Kevin

3 thoughts on “The worlds first computer 1st Century BC”