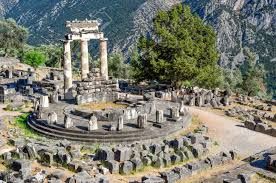 Long ago in space and time a monk sat thinking deeply on the subject of money.

He had it that he could make his idea work but how to build his designed Oracle on land he could not afford to buy. The mystery thus begins as someway he starts his build.Some years march by but now many have arrived to work on the idea. Before long all Greece have been told of the monks who can connect you to your dead loved ones. Can read your worries and for just a few gold coins let you see the future and the past as one.

Today we travel back in time to the 2nd century AD. We are on the Greek mainland some way from Athens.

The site was once  a service so rare, so gifted ,holy and pure ,that the legend of the Oracle that is Delhi raced around the Known World. A group of loyal holy monks trusted and kind serve both the living and the dead. It was here that mighty  King of  Ithaca, Odysseus, came to find his dead wife Penelope.

When he arrived heart broken at her loss this warrior King was told by monks not to say his name but to dress as all else and spend four days in penance to cleanse the soul in a cell with another with no identity.  All who came had to obey the written rules of entry.

In 1987 I walked around the ruins of Delphi in wonder. I had made it so far from childhood dream to be there. Stone upon stone and the odd wall are mostly what is left. From architectural maps showing how it all looked and numbered notes on every corner one may see how cleaver an idea it was. The oracle that really gave answers to questions then gave them to me now. Hours of strong sunlight on five days holiday spent researching this site paid off.

The mystery lasted four centuries until the coming of the Church of Rome. The Catholic pope had the Oracle stopped in its tracks and pulled to bits. It was all through the book written by a monk who described the workings so to move on from Delphi . It explained what drugs had been used to induce belief. How women used voices to tell the drugged King that indeed his Penelope waited for him in the curtain beyond lifes door.

Here at the site I trace double walls all around what had been the main dwelling.It was marked as the traveler visitors to see the oracle cells. It was clear how they manged to do this. Each visitor was brought down to nameless .Sat with someone in same mode and in closed locked cell. what happens is you each tell the other why you came to be there and a little of your worries. It is natural of a long stay that all of us would act this out. Throw in some drugged food and listen to every word behind the sealed walls. It was magic in motion and as corrupt as ever it could have been.

Then no one cracked it then the monks had perfected such an act that for centuries it worked a treat. Some high ranking world known historic people went there just to talk with their dead, see the oracle and find out the next move in life. For this they paid highly and made the small team of monks very rich.

All who came went home to tell of the wonder that is Delphi. Freely it was advertised from Greece to England all around the trading world.

The sun had gone down, the cool night air bathed the heated brow. It was dark and stuffy but I was between the walls. Here pipes protruded from the inner wall. .So this was how they listened. The outer stone wall was thickly built but the cell walls really only lathe and plaster mud brick type. Every word could be over heard by the monk as he slowly walked around the outsides of the many cells he marked down interesting comments on cell numbered script. The design was well thought out as its clever shape allowed voices to carry all around the tunnel behind each cell set in a semi circle. The listener could write all down as record.

By the end of the visitors stay all was known and the visitor was by now nicely drugged with hallucination plant heads and all kinds of magic mushrooms. Pliable of mind and with help from the team of monks led to speak with the oracle. Here a large metal bronze dish filled with oils and heated by wood fire under the bowl unseen. He would be drawn near and answered to each and  every question he asked and as if the oracle knew of his every though.

He would feel in capable hands. He would then see his future picked out in details in the floating hot oils that filled the wide bowl.

A voice in the distance told him it was his loved one, dead but able only to say a word or two. Even the white silk dress wafted across his face and perfume to drug him more as he fell to sleep. It was the best theater ever and it was done so professional that the fame of this spread around the globe and made this Delphi Oracle magnificently rich.

To travel today from Athens takes a bus ride from the city bus service marked Delphi. About 3 hours really depending on time of year and traffic. It costed then about one English pound. The site looks nothing from the road but as you have to pay to get in without the old oracle to boast of one can see it is very cheap now to enter. One big site with lots to take in and if you know the story and the famous who believed and had been there all comes to life even now.  I sat in the sunshine after hours on day one just walking in history.

A miracle no, a mystery no longer, a priceless fact , yes. But it was such a mystery to thousands of people who passed through and everyone heard and saw their dead speak. Received messages that answered all their questions and an oracle that told of their worries and gave them answers  that helped them. They also saw the beginnings of the earth in the oceans of fire show in the bowl of the oracles power. Heated oils can make lovely pictures and the monks had the skill to perfect.

What else would you wish for but the memory of your visit to last. The monks made certain that your every wish would be answered so you would be the advert for free and another satisfied happy customer.

It was the most profitable business in history. A monk who sat and thought this out was not next to God but he was the scoundrel so rich on earth he worried not. Need I say more.

We last not forever, no 10000 years, so be good and wait for the day of judgement clean without worry nor greed. A happy life to lead.

It  was the Greatest Roman Emperor Marcus Aurelious in his wisdom that said much like this and I  agree that he was right to believe that life is but the test and we are judged on our merit . Manners and respect cost nothing people matter and we can redeem our sins. The monks conned people in the cleverest way imaginable but it was evil one may imagine only what became of them later.Men such as Marcus Aurelious was remarkable for his wisdom in an age where sin was massive people butchered and killed in the name of riches alone. Yet no shroud has pockets to holds coin .

I hope you found interest in Delphi site and  a story as old as time ,as much as I found back then and writing it now.

Your host Sir kevin says thank you for your visits.