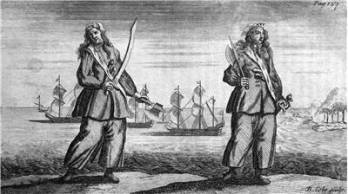 Anne was born in Cork, Ireland, 20th March 1697. Her father a fine upstanding Lawyer named William Cormac, who had an affair out of marriage with his servant Marry Brennan. His name was ruined by his wife when the child was born out of wedlock.

Cormac could stand no more of his shame and his wife insisted he left her. He, with servant and her daughter took ship to the Americas. Into Charleston ,South Carolina were he again set up his law practice and made good. So good in fact he bought a valuable plantation.

When Anne was in her teens her mother died leaving her to look after her father and learn the ropes of running their estate. Then at 14 she put a local lad in hospital after his attempt at rape. At 16 she fell in love with a no good man named James Bonney.

It was suspected by all that he was but a small time thief who had connections to the pirate Calico Jack Rackham the surge of the high seas.

Annes father had groomed her to run the estates and had her educated to be respectable. He refused to allow Bonney near her. He was right as he was only after the plantation estates it was later found to be the case when too late she had married him against her fathers wishes. Resulting in her running off to join the pirate company. After just a month Bonney announced he could not support her. He had turned states informant. Calico Jack was the leader of the crew and he even offered to buy Anne off Bonney but found him telling soldiers all about the pirates movements Jack just took her with him leaving the area in full sail in his ship, Revenge.

For some years they combed the high seas after plunder until in cove they dropped sail and took to party life on rum. All the crew lay about drunk in the hold and Jack so drunk he was sleeping deeply. Only Anne and her friend Mary on deck on watch saw the British war ship round the bend but as they boarded the women fought like tigers up to arrest. Down stairs below the crew, drunk and unable to see the danger, soon found themselves in chains.Even Callico Jack was arrested blind drunk giving no resistance.

in court both ladies told of being in state of being pregnant and found to be in that family way delayed sentence of death for piracy until children had been born. Mary died in childbirth in that dank and damp cell.  What happened to Anne is the mystery .She neither died nor remained in her cell. The gate was found to be locked and  the bed not slept in.  On inspection all was found to be safe and un damaged.Only the prisoner had vanished.

Either someone let her out and helped her escape locking the door to make it look a mystery  to shield themselves ,or she died and law did not want an  enquiry  made, as two women dead in cells makes no sense and a pubic need for facts.

Reading a book published just after the Pirate history came to a halt made possible by Navy interventions,  said Captain Charles Johnson called A General History of the Pirates answers questions. In the pages he covers all know pirates and on coming to Anne Bonney the writer claims she died aged 85 back in Charleston, South

Carolina in her bed.

No mention of her escape from justice is declared so it seems she either paid, in one form .or another, for her cell gate to be left open and back door out to freedom. What became of her child is another story we have no answer on.

Anne vanishing is a good story even so. What a pirate she made even so. Guilty as charged as no one made her join the Devils crew. She went on her own judgement it seems.

If as I believe it to be true she did in old age it leaves a guilty helper in the pages of history that will be hidden forever no doubt.