The real man who became a world leader in war. Born Temijin son of Yesukhei the bloodline clan leader of Kubla Khan and the mother Hoelun of the Chinjin dynasty of Mongul tribes bloodline. On her sons birth in 1162 a birthmark on his hand told of great leadership. So she trained him well in art of defense and to protect himself in violent existence between warring tribes and to know and understand the need for alliances.

Aged 9 years old Temijin was taken by his father to live with his brides family. That chosen wife was Borte. A girl of same age who knew her own mind. She had know Temijin would pick her as his own wife. He did select her freely and that formed a bond between them. Some weeks later He was to hear of his fathers death on returning home.

He had fallen in with a camp fire roast of lamb.He knew that this tribe had been instrumental in war against Yesukhei tribe and he had caused death against one of their Tartar Prince who he had killed in fair fight. He was offered hot soup from the fire and bread to eat. A lamb based soup that he found to his liking. In peace he and his men were allowed to ride  away on their journey homewards. After about a mile he started feeling stomach pains. After five miles he was dead and fell from his horse to earth. The soup had been poisoned by the Tatar warriors in revenge for the death of their fellow warrior.

At this news Temijin rode home and took his fathers mantle as leader of that tribe.  A mere boy he took full control and and no one argued too much. Aged 16 he claimed Borte as his wife and they married. just a few days later she was captured by a Merkit tribe hunting party.  Made the sex slave of their leader. Within weeks Temijin killed all guards and rescued her. A child was born that was in some doubt but Temijin claimed it was his child no matter what.

Aged 20 Temijin was captured by a so called friend and sold off into slavery. In a walled room he was imprisoned after killing a guard. The iron bars to the window gave him his only view outside of his jail room. For months he watched the guard living on one bowl of rice every now and again and chained from wrist to wrist he watched all that went on outside. Then he used a guard to help him escape. He ran all the way back to Borte who now gave her sable coat as dowry to Temigins mother as gift. Borte  had her husband back and would stop at nothing to save him.

But Temijin had plans of his own.he built an army around him ready to defend. Within a year he fought all comers to be King on the Mongolian steppe. Traitors came and went but he now saw only revenge. his wrath swept all tribes under his banner. He then hit China. Building that army into millions as he speed through out Europe to conquered all in his path. Loved in leadership he raced through to France nothing could stop his golden hordes in battle and soon his empire was so vast it en compassed the know world.

When he died in 1227 they say his broken hearted men buried him in a secret place.  The grave hidden by 1000 horses trampling back and forth over the soils in order to hide the last resting place of the might khan. What killed him is in truth a mystery too. Some say it was fatigue and dust in the throat or a dust mite that choked him. It may just have been his time to go for judgement with his maker.

Experts have proclaim that that site is in Khentis Aimag province of Mongolia. Today a team of archeologists have professed to have found his body in the temple of Genghis Khan.

Decades later in 2004  a mass grave was found near by in which contained 12 horses sacrificed and 16 women possible wives to Genghis khan lay in golden coins for a bed.  in armour lay the bones of a great war lord which shows signs of being Temijin who is known as Genghis Khan himself. 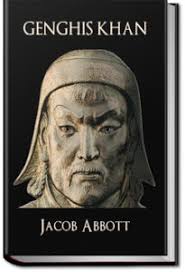 Genghis means great leader and khan his family name. So was it legend only that a river was diverted and 1000 horse used to hide the last resting place of a remarkable leader or is he in the golden temple as said? My belief is his remains are under the soils of Mongolia as predicted. The mounted rider and the base do not look as old as 800 years to me. And why would his army want to announce to his enemies the burial site? It therefore sounds more than right that he is buried in the place that was found in 2004.

The tomb of Genghis Khan with mounted leader on the roof that dwarfs the building below. Known as the tomb of that war leader but is it? A man such as Genghis Khan who was a really a thief of other mans property would be hunted in death by those he insulted robbed and made slaves of. So a secret place such was chosen for the other famous land thief Alexander would be the way his army Generals would want his grave up be. Indeed Khan himself would have decreed it. The bones of men , women and horses found in the earth in 2004 must be the burial site of the Mongol leader for certain.

Yours, dear reader thank you for your time. I hope you return for more amazing facts