When in 1900 a group of young ladies being boarded and schooled at the Appleyard College Academy in Victoria Australia go off for a picnic something very strange happens.

Divided from the main group four girls set off with their math teacher to wander in the rocks. A picnic is under way both sides of Hanging Rock in the Macedon range of mountains. The girls see a family picnic and a young man watching them. Up higher they explore. Miranda a blond leader of that group has had a premonition of some standing that she will not return from the mountain. This guides her up through the rocks followed by the girls but the teacher is reading her book and sees not the ladies take down their stockings and remove shoes to climb higher into the old volcano caves.

When later the teacher comes to see it is late she at first tries to call the girls.Then decides to follow them. Far down the mountainside the main party are worried and leave one teacher there in case the party return. The coach takes everyone back to the school an hours drive away.

A week later two boys find one of the missing girls almost dead in the rocks and carry her down bit by bit until one boy takes his horse and gallops off to find the doctor. Once alerted a party ride fast to Hanging Rock .It is now they all then carry her down to the coach and back to schools hospital wing.

The doctor is concerned that the girls face and hands are torn and damaged as if by a fall. She has no marks elsewhere on her body and she has not been molested or interfered with. The fact that she has just come to senses and can recall nothing is vexing and that her week without food or water seems remarkable that she even  survived.

A full and massive search is launched again for the other girls and their teacher but again not a sign of the lost ladies comes to light. A bloodhound is used and a gap in the rocks is located by the dog. But nothing is found. It seems the rocks absorbed them.

In research dear reader I found the book by Joan Lindsay absorbing to read. She wrote as a first book in just 4 weeks . She was born in 1896 in an age of Queen Empress Victoria and wrote that book aged 70 during the Vietnam war in 1966. It became a smash it and was said to be based on fact. The mystery is why the writer insisted it was fact when I found none is puzzling. Was it the writer wanted it to be  a real mystery and so a cult book on sale. Did she base it on legend ,no. Searching newspapers of that time nothing is reported on missing young ladies.  So it is fiction only sorry to say and happy for the saving of souls to report. 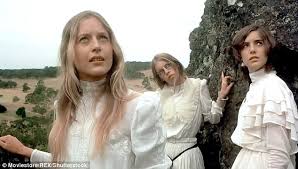 You see the last chapter the publisher took out which tells of an ending by Alien capture on the mountain that would have ruined this most haunting story of mystery as to what happened to young pretty ladies lost in the rocks under a hunting moon. Enjoy the book as I have not told it all here and surprises still exist for the reader never the less my attempt at finding truth was my way of proving mystery it is not .Fiction it remains in a haunting tale of vanished ladies into the very folds of rock that form an ancient volcano.

or even Drydens Rock is 344 feet higher that the surrounding plains. It is part of the 7 million year old  Macedon range of mountains and is a volcano with no history of eruption in history of mankind. It is situated in central Victoria province Australia.

However millions of tourists have visited the place since that book was first published in 1966. all seemingly to believe that it all happened as real time. Movies had been made with big directors and famous actors and actresses to set the legend in place.

The writer Joan Lindsay died in old age and it still sells as a book of fact because we all love a good mystery. There is something about young innocent college girls in laced dresses of Victorian white with long blond hair blowing in a gentle breeze being spirited away forever. It is haunting and none forgiving and sad. Not a single trace of a bit of lace white linen no trace of footsteps and only the dawning knowledge of a loss so great it pains all readers. It must be true said one lady close to me.I want it to be true but so glad it is not in a way. As it would be cruel to wish it so as fact.

There is a creepy sense of haunting along with hope they are returned to tell us what happened. 1900 is 118 years ago when the story was set. 1966 when it sold all over the world and no one you read it ever thought it fiction so much is the power of a good yarn.

So there we are my reader yours is the story now. Read the book now even knowing the truth and see how you will be drawn in slowly to wanting it to be true . It has that power over you in fact to remain a mystery forever in your heart.

Thank you again for being with me. How much I hope you liked this article

One thought on “The Mystery of a Picnic at Hanging Rock”