History dictates a tale of the man called Robin Hood of Scotland. Sir Walter Scott magnified his life as that of a hounded saint crossed with a noble lovable rouge. Even Scotland seems to raise him high as hero. The movies did bring Rob roy to public eye again and made Liam Neeson the hero of the screen. The sad bits echoed as his dead kind poor wife was raped by a swords Master out for Robs head. Then the thief who robbed him and the fight if his life to finally win over the bastard swordsman in justice for having his wife Rob Roy brings down his great claymore sword and slices off the others shoulder through the neck.

Lovely film but entirely rubbish as Sir Walter Scott also made a hero of Rob Roy in that book of that name. in truth Rob Roy was able to talk people into joining him. A real smooth operator and able to con his way past troubles by confidence tricks so well no one knew he lied. Yes a charming man at times if he wanted something from you that is.

Evidence has been found to show that Rob Roy was the best sword player in Scotland. Able to fight with a claymore of heavy iron for hours. He had tracking skills in the mountainous native area of he loved and could seek as well as hide better than any man. But then we discover he was also a good cattle rustler and a conman too. In 1715 he raced to join the forming army of loyal Jacobites .These men and often women had the idea to restore King James to the throne and rid us of the German king. This action was treason in law even if it was the best plan about. Rob Roy then reported all to the English King and was paid well in gold coin. He bought more land to farm cattle.His ploy was to be the humble peasant whom was being done down by the mighty powerful. Many felt sorry for him then he drew you in to be his helper in robbery making it justified by the tale of how they took it all off him. Eventually they did.

his loyal wife Mary had grown up near Rob Roys  lands and was his first cousin and also a MacGregor. She was not touched as the bladesman in the movie was fiction. no sex crime was done against her. True that in dealing with a loan from the Duke Robs aid vanished with the payment. The Duke of Montrose and gaming friends gave him no time to repay and so made him an outlaw thinking it was justice for the gold coinage the King had given Rob Roy for selling out so many lives.

Rob Roy made money by con and knew cattle and how to steal them but the rich nobles had claimed his land in court. He hit them hard in robbery and became an even greater confidence trickster in card play.

Rob died by natural cause and his grave is not known. His wife has a grave listed as hers and across the front it carries the message “MacGregor despite them all.” speaks volumes.

I say Robs grave is unknown as we know that his fathers grave is in Balqhidder Churchyard and so many think his son is buried alongside him. No proof is found to support that tale. Rob Roy died in his bed we do know that in 1734 aged 63.

sir Walter Scott was born in Edinburgh Scotland 1771 died at his home at Abbotsford in the Scottish borderland in 1832 bankrupt. So no way could both men have met as suggested by some. 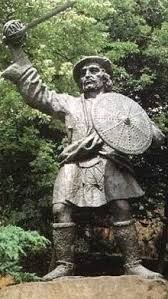 The statue of Rob Roy Macgregor. Nothing like the man himself as he is wearing the kilt which was but a Victorian invention of national dress by Prince Albert, Queen Victoria consort and husband. The true version wore the plaid cloth all around him in one piece like a blanket with a belt .It was the way it was draped that made it look good.

Many say Rob Roy was a lovable villain but in fact we now know he was a dangerous man in more ways than one.

Grave in churchyard but no sign of Rob Roy as it is his parents grave.He may be with them but its not recorded as so. with Campbell blood in his Gregor clan and from his mother he could charm the birds from off the trees. He could be buried any place in that area of mountains and lakes I do know so well as a walker in my youth all over the borderland between my native England and the Scottish foot hills. Abbotsford House I visited twice to see the Scott collected library.

Pity as I have read Scotts novel and finding otherwise was a bit heart breaking.Then should have known it as his father was English army through and through. Sad ending for the Jacobite cause that ended in a blood bath with the capture of the Earl of Derwentwater as he rested his men and horses in Bolton Lancashire on his way south to join the Rebel army. It went on and on until Prince Charles Edward Stuart made the worse mistake in history in 1745 marching through to Derby and leaving London open to greet him. Another real live mystery we may investigate later in time. However that cause died along with tired men against cannon and the German Kings English army at Colloden Moor near Inverness and the real Highlands. Prince Charlie vanished back to Rome.He died a total drunk.

I hope reading these facts you are not so disappointed as I was searching for the truth.

Yours faithfully and with love ,Sir Kevin.

One thought on “The truth behind Rob RoyMacGregors legend.”