Whom in 1784 inherited the great Lonsdale Estates.  It was the one time editor of the Westmorland Gazette in the town of Kendal, one Thomas de Quincy who said the above about the new owner of Lowther Castle the Lord of Lonsdale in print. De Quincy lived near enough to know Sir James personally. He was famous himself, for his work, the best being the Opium Eaters.

He told Wordsworth the poet working as post office stamper that Sir James was ” A true Feudal Chieftain in both appearance and in deed,who took delight in exercising his disdain for modern refinement by haughty carelessness in his magnificence.

There are many tales of this high Lords mischief among the local traders but little reached the mighty Lord it seems.

Sir James Lowthers  downfall was his romantic nature and while he endured a terrible marriage ,she lucky to have escaped. He was smitten by the charm of young daughter of one of his farm tenants decided to marry her there and then. She however found her self his mistress only. he found that he had problems hiding the fact so had her paced in one of his house south of Cumberland. In fact in a manor house in Hampshire. She of law standing ran the house her way and servants became her friends. This suited not Sir James who often called on her on his journey to  the House of Lords in Parliament in London. 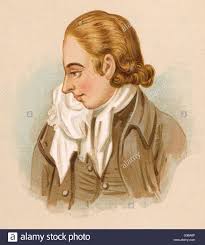 Sketch of Sir James Lowther at the time if investigation into girls body in his care. Are there ghosts in England well Lowther castle was Bell Book and Candled by churches who believed the story true

In research this arrangement suited both parties that is until the girls untimely death. Short illness of six days seems to point at poisoning but no charges and no investigation as no one knew she was there. It may have been something else that killed her as even Sir James was mortified at the news. He rode through to Hampshire four days later as horse riding is a slow way of travel and roads then in winter mud ridden and impassible ,in summer dust bowls. Bedsides he must have rode that horse hard to do a 490 mile journey in such time. May have changed horse on the way.Then records are not that deep.

However he would not allow the girls burial. He took her back to Lowther Castle and dressed her in ermine robes and sat the corpse at his dinner table as a dead guest.

This practice went on for weeks until bits dropped off the body as servants moved her chair to table one breakfast time. This decided they all had had quite enough and they collectively told Sir James he was mad, before leaving without notice.

So it was then he moved the body in a glass lidded case to his farm house in Maulds Meaburn village near Penrith  in the Eden River valley. Not far from his great castle he mourned his loves passing .

A local Vicar was shocked when he called to satisfy locals of what was going on. The stench of putrefying flesh had the vicar taken to his heels and vanished. The glass fronted casket containing her rotted remains was housed in a cupboard when the Government forces marched in .The body in the case was found and so Sir James had no choice but to agree to bury her. 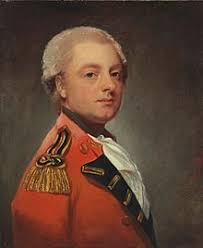 He traveled  with the coach that she was carted in, to Londons Paddington Cemetery and Sir James moaned as she was lowered into the tomb he had paid for. He set a company of Cumberland Militia soldiers around the tomb on guard for several weeks.

After this he sank into fits of despair and depression and so returned home a month later to Lowther Castle miserable. He died in1802,unloved by all who had contact with him. His many servants his tenants and the House of lords.  Thomas de Quincy and the Church of England saw the coffin move from side to side and only with great difficulty was it lowered under ground. The legend began that same day when a coach and horses bolted and raced up the driveway to stop at the castle door a if by evil wish to return from his death the great Lord Lonsdale Earl of Lowther Sir James had indeed returned to his seat. As famous in death as he was infamous in life

Today the castle built by Scott the architect for lowther lays in decay .None would dare to live within it. I was shocked when I walked about its roofless rooms as in fact its twin castle was built in rural Herefordshire called  Eastnor castle around same time for a customer Scott must have raced the plans for Lowther  down to middle England and sold the plan twice. Today Eastnor is still a family home. 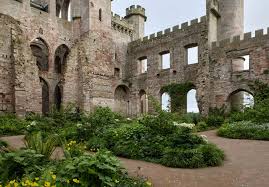 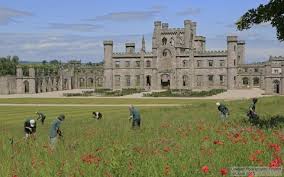 So mystery is why such a building as Lowther really was left to rot.It must have cost a fortune to build even in those days. The Lonsdale Lowthers family remain near by in equally  nice property but have never used Lowther Castle. Nor have they sold it. Well Jimmy was not at home when I made my visit inside what is now a ruin. Mind you it was a visit on a really sunny day when May sets her blossoms to impress the winter worn soul. Mine not Sir James soul. For that is quite another story.

God be with you all.