We all know of the legend called King Arthur the Briton. A war time Roman at the fall of Rome who remained in England to fight Vikings and prove he could rule as King. He most probably was a Britain in the Roman army called Artorious   His father is said to have been Utter Pendragon brother to a King himself.

In the wild borderland in front of Scotland we find the valley that steams from the hills of three counties but it is the Cumbria river called Eden that flows north and is the only one that flow that way in Britain. It runs down the Eden valley and on one of its bends we find the remote castle that we know was built by Utter Pendragon but in 1080s. He is a recorded Norman Earl who built and had that castle washed away before it could be finished by his stone masons. The Eden river had swollen and down the castle fell.

Record says he started again but river came back with power to scold him. Eventually and much moved back he managed to effect his dream home. War built for protection in that part still wild today. Not a big castle more a family home it stood but time neglected it into the romantic ruin we know today.

In knowing its owner Doctor Raven Frankland  who worked on the fallen masonry and dug out the cellars during the later part of his life I joined him for a day digging in the hard packed spoil. 30 years it had taken him ,bit by bit, to clear out and cement up what stood to help save it. We talked about its builder and Utter and a a man for short conversation as he was a busy man. A doctor of history and one of the richest men in the country owing much of the lands his family inherited and bought way back in time.  A vast remote empire of thousands of acres and village.  He told me that Utter could in no way have been the father of Arthur the King. But I knew that from dates .What did come over was that Pendragon was not Welsh nor his town of Penrith at far end of county new as made in 1972 Government mess out of old and sacred Westmorland and Cumberland plus bits of Lancashire and Yorkshire. Now Cumbria.

Lady Anne Clifford had owned that castle in the days of Cromwell and she had stood up to him too. It had a long history of owners up to Frankland time.

So who is Arthur of the Britons. The once and future King? Some 20 miles up the A66 trunk road that follows the old Roman Verterai  highway we come to an ancient stone circle now just a mound .It holds the name of Arthurs round table. Across the road a Roman grave stone stands against the wall of a field. Roman villa stood in that area we know from floor found. My guess is Artorius was a Roman army Officer who with the men he had lead in battles decided to take their freedom ,or had been ordered to remain when Rome went back in force to save Rome from Attila. They survived the ending of Roman power and known world empire.  He had the skills the armour the horses and desire to rule. He was Arthur the legend. The rest made up by the first writer who gave us all the cast that did not exits as far as names relate.

Morte de Arthur is an old poem that tells of a man who became a King called Arthur it weaves a story much as we know through movie land. Only small parts of the whole are true. He was not Ambrosius he was Arthur and he did exist but not as we know it today. 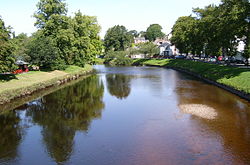 Excaliber was one of the seven swords in old Briganti Norse legends that became made by the blacksmith Weyland.

Weyland was punished by Swedish King Nidud who lamed him for the rape of his own daughter when taking a gold ring to be repaired. He had sent his two sons who Weyland killed and made cups from their skulls and so chained to an anvil earth bound  smithy to shoe the hooves of Odins horses he was sentenced to do for eternity.

This is mentioned in the Volundarkida a 13th century poem but was taken from a 5th century work called the Beowulf poems.This was England oldest known record..  So did Arthurs sword exist? no, it is called Excaliber which gives us a  big clue. Ex meaning parted with and calibur the army name for a bullet mold.  So parted with mold. The legend really is that of King Charlemagne of the Lombards 742-814 AD who had his Knights and castle and empire and a sword that he loved to use. This was the mold that Arthur as King had taken over in most details and a magical sword added for good measure. Not that the man himself would have known as it all came after his own time.  Arthur lived centuries before Charlemagne then we see it just cant have existed. the whole story is fabricated by Geoffrey of Monmouth a known writer of records of ancient Kings of Britain.. A monk who invented all he had no information on which was all of them.  Arthur may have lived but nothing as the legend makes out. He was said to have led armies against the invaders who may have been Saxon or Viking as every one wanted England after Rome fell.

This said smithy is located in Southern England and can be seen today. Legend is he made 7 magical swords and cast them up into the skies so to hide them from his brothers and his father Odin. They form a heavenly star formation. For Arthur one sword was granted to make him king. All nicely rounded up to make a good story better.

Uther Pendragon  was born centuries later and no legend just a historic builder of a castle in North West Britain who could not stop the river at the place he wanted his castle. He is know for only this and no more.

So the mystery is who was Arthur and who was his father. Six stories exist but none hold water so far. We need to leave the whole legend behind and start with one ex Roman army man who may have had had British blood. Nothing else can be trusted as fact. Most of the story relates to another real mentioned King who was also Holy Roman Emperor and ruled in Europe a vast area.

When the story of Arthur was being invented by Geoff and all that came after him it was  many centuries after the real man lived and died in battle. But there is nothing like a story that is the heart of the meaning of all that is fine and noble in mankind to stir the nation into unity. That is why this story will persist unto the end of time. The once and future King story is far older than even Arthur. It relates to that of Dunmail a northern valley King who fought raiders and was killed at the head of a pass called now Dunmail Rise  near Keswick in Cumbria. It is not well know but the great heap of stone on the ridge came from the rock slides of centuries. If one big stone is under that then there by lays King Dunmail. In those days so far off it was common for a rich land owner to call himself King of the valley and at one time many such local valleys had a king. Maybe a farmer or someone who was big enough to insist.

Dunmail Pass around 1900. From Ambleside to Penrith up a very high hill. They have stopped to view the old Roman hill fort just out of the right hand corner of this photograph. I have crossed this same road on foot on a motorbike and cars so many times from youth that I know every stone turned. Even on a horse once. Took all day 18 miles.

Dunmail is said to have won the battle but dying of his wounds told his loyal soldiers to bury him under a pile of large stones .If he was needed to defend and protect his lands again all they had to do was to knock on the stones loudly 3 times and he would rise with sword in hand to lead them against the foe. This battle is recorded as fact and many English Britons died there but four times more Scottish raiders died that day.  The King Dunmail was killed by sword cut to his chest and died of blood loss. The rest is of course with much artistic license but is the first mention of a King that will live to fight again. It is added to the story of Arthur from this tale by writers in the past who built this story by candle light and guile. When one takes away Camelot and that sword what is left is a Romano-Briton leader who died fighting the enemy and was famous in his own life time.

One thought on “The real Utter or Uther Pendragon.”