I started this so I must try to finish. It is something that happened long ago in May 2007 that upset the World herself. I never knew her but nor did others who heard of a 3 year old child who simply vanished. A case that hunted a nation brought tears to many eyes and has never been brought to heel.  As all remain alive today who entered this note worthy tale one can go softly into facts or invade in force. I hoped to find a passage between and hopefully tell the case of a 3 year old girl called Madelaine Mc Cann as facts only. resulting perhaps as I see what happened as the only way it could have. 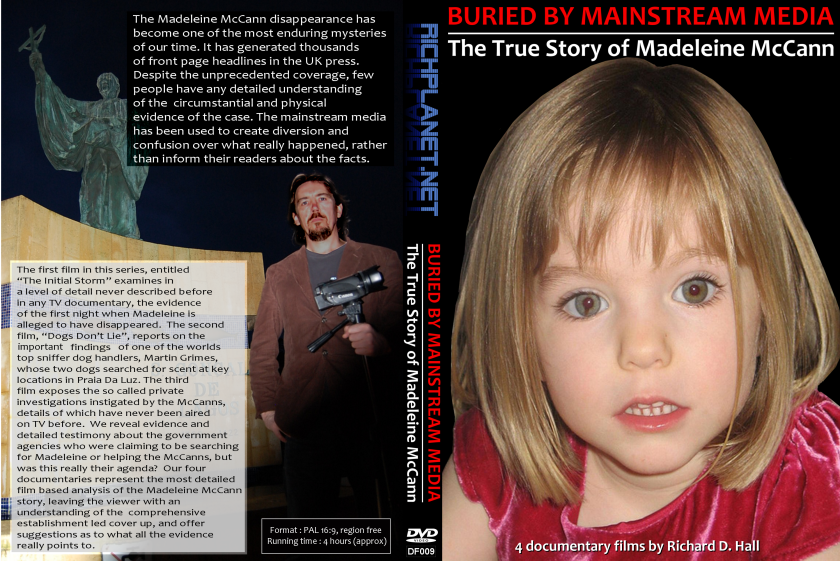 To note that many many accounts have been told of events and the shifting story of her parents will not help us in this singular action.

In some way I admit I hear a voice begging me to find the truth . Am I fooling myself or do You know she only wants justice. In any event I care, so onward we go in this strange feeling that tells me do not be surprised.

Little Madelaine was born on12th May 2003 in Leicester England and died In Portugal aged nearly 4 in 2007. I do not believe for a second that they sold little Maddie off to slavery.

Her parents both in the Medical profession. Her mother Kate had studied hard at Dundee University and came out with a BA in physiology /sports science . She was born in Liverpool. Both had money jobs and cant see that they ever needed the cash to sell off a lovely child.

Her husband born in Glasgow had a degree in Medicine in 2002. The pair meet in Scotland and five years later married. They moved for work to Midlands of England and started a family . Maddie then twins  gave parents  enough to cope with and both in careers too.

In planning a holiday they chose Portugal as it was becoming really popular or was it owing to friends? We dont know but to chose a back end of resort hotel seems very strange as both had excellent salaries. I always chose hotels in Algave near and around the harbour as best of best hotels. Yet they chose the back end place far cheaper?

We move to the evening both parents had arranged to meet up for  a night out. The group of professional medics and doctors and Mc Canns referred to themselves as a group as the Tapas Nine. Hinting at long time friends and drinkers.

So all knew each other long before hand. Husband Gerry went ahead of his wife Kate who had not bothered with the recommended nanny service attached to her hotel and well advertised.

.She wanted all three children asleep before joining her husband but the eldest was a hand full, a real live wire, who would not drop off to sleep that easily. Did Kate slip sleeping drug into her child so she could sleep all night whilst she partied. She in medicine had the means, the skill, and I say she did this but made wrong amount as mistake and that killed her child.

Now it all goes hazy again as so many statements and none of them agree with others. Kate says she went back an hour later to see if all was right with children. She was away a long time says witnesses. Then she appears unsure of her self. she tells her husband Maddie is missing .He flies back to see in the room. Someone called police. She tells them someone had jemied the window and had taken her child. Later she tells another officer he must have had a key to the door. Both window and door proved secure. At this stage the local police made a really massive mistake. I would have taken all the bedding sheets blankets and even mattress off the child bed for DNA testing. They however did not. Be not acting on it vital clues had been lost.

Maddies blood, DNA found by police in this hire car that Mc Canns hired days after child went missing. Can not understand why no arrest has been in place.

Then they interviewed Gerry her husband, The witness, a waiter from same hotel, told police that Kate had gone for a jog. This was confirmed by another witness and so two hours later she returned in no sweat. Now if this had been my daughter all hell would have moved with worry and anger and way to find what I could to trace my childs movement.  We all do worry differently but still I find this woman hard as stone. 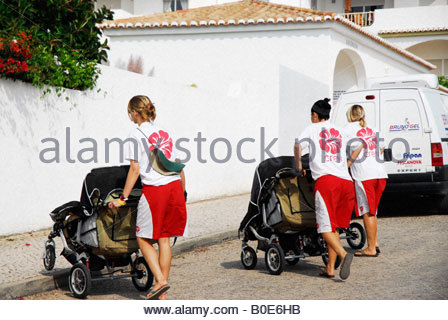 These are some of the registered child minder outside of the hotel used by Mc Canns. Why they refused such a good service is a mystery still. Maddie would be alive today if they had.

Portugal police now accused the Mc Canns of murder. They really thought it all related to her. I must say of all the facts laid end to end so do I say Kate Mc Cann is guilty of hiding the true facts. Clement Fraud the MP and chef TV personalty and grandson of Sigmond Fraud lived near by and told Kate The she was both a nyphamanic and was hiding the truth. How he arrived at this no one knows? seems he also had form in child sex.

If as is suggested by McCanns that Maddie had been abducted why stop at one child as three children lay fast asleep in that room. It makes no sense. Then a witness tells of a man with a small child in his arms with pink and white sleeping clothes. A local man known for child abuse was interviewed twice by police but had a convincing alibi. The picture of a man in dark clothes with a child in Maddies pink and white distinctive pyjamas could well have been Madelaine in her fathers arms.

A lot of red herrings after this tell of Maddie being sold to near by sex offender. But to avoid the real story as it takes us far out from the really simple truth.

A lot has been written about this child and her fate but closer inspection shows more. I think it was Kate Mc Cann who gave her child or children sleeping drugs to set her mind to party life. I do not see murder or white slavery as possible.  I see it as  simple as that. She had the time to hide the body .Maybe her husband later carried the dead daughter out to bury her. It is very odd that if abduction was the cause then how did Maddies pink and white pyjamas appear for her parents to use as sympathy in TV interview years later.

We say no motive links to this case no matter how hard one tries to fit the many pieces in place nothing fits. So my theory has one motive ,not of event but of cost of real facts being known. Kate mistakenly killed her eldest child maybe gave her too much drug by accident or because she was hard to get to sleep. Over estimated the dose. Then she thought if  known her career would be in tatters. She knew the child if tested could prove her mistake so she told her husband and he seeing the Doctorship slipping  away by association, helped hide the body of his loved daughter. Later in the dark he carried that childs lifeless corpse in his arms , was seen by witness so he carried her to some place know to him. later using the hire car the little body was finally buried. She may be fathoms deep but we need the corpse to be able to prove anything. Forget search for any other reason just divers in the seas off coast of Portugal will be a good start.

Now the law moves fast from mistake to hiding the truth and diverting the case of justice. This would lead to jail time. Confusion is the way they to coped with police and there we are back at the start without a single clue. No body , no bedding no DNA.But some found in hire car? I bet it haunts both of them daily and each time anyone comes near to start a case they go on TV  or news to say how broken they are? One time even holding up the pink and white bed clothes of daughter that if she had been snatched would have gone with child?  I say Katherine Macann is guilty as hell. If she had not dug the hole that she stands now in she could have been cleared and lived a far better life. He too as he is as guilty for complying. No smoke without fire in detection so Ill leave you to decide what happened that fateful night when a mother decided not to pay for professional available Hotel supplied child minder but handle that job herself.  The only sad fact remaining is where did they bury that poor child and when we find her all will come to light. We must find the truth for a child is lost and lays alone some dark and ugly place. Though her spirit will have left her to live in peace I am sure with God

Yours with so much thought. Sir Kevin.