We who study history are always concerned about finding facts .In this case today facts are indeed a rare commodity as only the word of those who knew this valiant fellow is recorded as fact. We have no other way to prove he was who they say he was.

However, in good faith , we march on to find the truth as one. 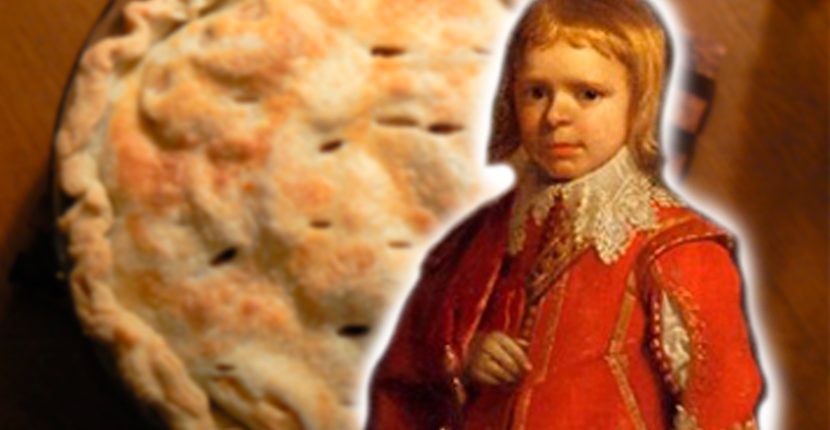 Jeffrey Hudson was born in the smallest village in the smallest county of England in 1619. Oakham in Rutland  and he the smallest person ever to be born in history. If he was as recorded just a well formed baby of just 18 inches long.

He seems to have come to the top like cream as aged 9 and just 20 inches high he was visited by George Villiers the Duke of Buckingham and who was the Kings favourite courtier.  Buckingham must have found that Hudson was real and so took him to the Royal family as they had much interest in curios.

Hudson was dressed as a blackbird and a pie was baked and cooled  and he was helped inside it. At 24 inches high it must have been a big pie. The dish was placed before the Kings table and before the eyes of the King and Queen out sprang tiny Hudson as blackbird and delighted the Royals with his song. It gave rise to the childrens song about 24 blackbirds baked in a pie and was that not a dainty dish to set before the King.

Jeffery Hudson became  Queen Henrietta Maria courtier and remained just 24 inches high according to the court records of the day. He grew to 3 foot according to art records.

Now we come to the amazing fact that it is said Hudson was at the battle in 1645 in a saddle bag on his own horse fought with sword against Cromwells army. In London he was blown by a gust of wind towards the river Thames and only saved by a shrub bush that  caught him by a coat sleeve.

It is said that little man was so spoiled with fame at court and was so handsome he that the ladies adored him and he wanted love.  He became so pompous and full of himself that he ignored his own father on a Kings progress through Rutland.

In 1649 this little man picked a fight with Lord Crofts brother. Duel arranged and at the appointed time Hudson with a tiny pistol appeared on the field of combat to find Croft had a water pistol but Hudson was so enraged at this indignity that he shot dead his opponent .He was jailed for the crime and this record is the only real fact that this tiny man existed outside that Royal portrait.

In time the Queen released him and fled to France as her husbands head was hacked off in Londons White Hall.  Jeffery Hudson was captured by pirates he was taken as slave. By his own skill escaped and nearly drown.

Sir Walter Scott wrote that Hudson died in 1682 in his 63rd year. I found that he did not die then at all. This fellow as brave as he was small lived on and died in poverty having no place to find peace aged 64.  He had for three years traveled as a wanderer lonely and sad taking from dog bowls food he could find. A sad end to this rare being of human pride he died alone no Queens ladies to adore him. His great friend the Queen of England died in France also in poverty.

This lead statue is at Longleat House but where it originated is not clear. it is however a likeness to Hudson made from his armour design worn in the Kings army.

We have no clue as to the grave he lays in or to places he wandered at 64 years of age.  He most certainly existed and was Knighted by The King himself for bravery and loyal service to the Crown. Not really a mystery but his grave may serve as that as no one knows the location. I know we do not use the name Dwarf no as it is deemed to be rude but that did not upset Hudson those days. Only those who treated him like an idiot he raised to anger with. Taking a water pistol to a duel , well! who could blame what happened on Hudson who had such pride and passion as it dealt with an insult the only way he knew of. Rest of us may have simple laughed. Then we are not small and insignificant ,but he was.

A little blog for you on a massive subject hope you liked it.

Yours with love Sir Kevin.