It had rained for much of that week in July 1968. For John Stonely he had had enough of Hippy life and had long ago wished to travel across Europe to see his sister in Estonia . She , Susy, had married a diplomat who had been posted into Europe and now in the Embassy life in Tallin city.   John had been a golden gifted guitarist until in a fight in a side street club he was involved in had broken two of his right fingers. He had not played a note in months. So with little cash in his pocket but a full tank of fuel in his bike John set off from Preston Street surgery with his fingers in plaster to start his adventure.

By noon he was at the mouth of Kingsway, the as he was injured did not want to rish  Mersey Tunnel in Liverpool city centre ready to go under the sea to Cheshire and pick up his stuff for the ride of his life. Nothing was going to stop him .The rain fell down lightly as he came into the mouth of the Kings tunnel a soaked wet girl in an anorak of blue and white with mattered golden hair hailed him down. He stopped only to say no he was injured ,but she climbed willfully into the saddle behind him. He could feel her body next to him and her warm steamy breath on his cheek as he turned to see her lovely young face. She was light as air as he raced into the lane with nothing in font or behind,  a clear run across to Birkenhead pay desk. The journey was about half way complete. he heard a scream, stopped the bike and turned, but the passenger had gone. Not a sign of her anyplace so he turned about and ran back the way he had come but nothing was out of place .She simply had vanished. Deeply concerned John fled back to pay desks in Cheshire side of tunnel.

He was almost frantic as he related the tale to police sat in office. They hurried back in

the SUV with sirens screaming but though not a sign of a girl in that tunnel. Police had a job understanding until at last a tunnel inspector came into that cabin. After hearing the story told for the forth time he told John he was not mad. It seems in 1961 a girl had fallen off a speeding bike in middle of tunnel in first lane. She was dead as she hit the ground her brain crushed. Her name was not found as the biker had not stopped; her belongings no doubt had remained on the speeding  motorbike. No one came forward and news carried her photo for weeks later. He looked at John who was now white, her face so lovely her breath so warm yet she a ghost at last made sense to his puzzled mind.

He went on to great things but he never forgot her. Yes he did reach his sister after two weeks working in Latvia he had enough to just pay for fuel to get that rest of the way to Tallins lovely market squares and reunion with sister and her husband Bob. 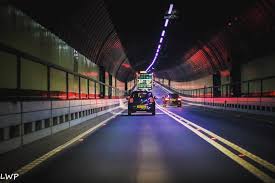 The last time I saw him he was an engineer in Kendal. He thought that she may have been Albanian girl lied to by trafficers who took her passport and chained her to prostitution .She was trying to escape and so could not cross over in death so easily but try as she might was lost .Her ghost may still be trying, he told me ,head down at his work. I think he was thinking the day over and over  still.

This is a true story, only names are changed, as I could not contact John to ask to write this  up.

Hope you liked this story.  Thank you Sir Kevin.