William Watson Whiteside was bit a boy when his Printer father bought the old terraced house in Baskerfield street Manchester England. It was a red brick Victorian built two up and two down typical of that area and period of 1906. House either side looked just the same but at a cost of 240 pounds and 60 for lawyers cost Edwin Albert Whiteside had bought his first house as print manager. He was married and now with three children.

The house had been built in row in 1867 and the bedroom used by the boys had a cast iron lead blacked fireplace set in the wall across from the doorway.  It had never ever been of use as Mrs Mary Whiteside thought the chimney blocked. Nothing was done to start it up. The heat from the big cast iron ovens in the extended kitchen reached upstairs and so the boys always left the bedroom door wide open. 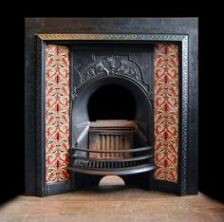 It was at about this time Mr.Whiteside brought in the chimney sweep who found lots of soot but no blockage to the chimney. Again the fire was set and lit but as always the room filled with smoke.

Open windows in dark mid winter took an hour to fan out the grey black smoke. Tired and unsettled all went to bed and peace and silence returned. William strained his eyes to see what was near the fire as little scraping sounds he could just detect. His brother was deep in dream land but William as an adventurous 10 year old  just had to see what lay beyond his view.

Over the sheets he peered and to his horror there in the chair that held the childrens clothing sat a bent old man in a black frock coat and he was pointing to the fire place as if pleading with  the boy to see.  William was transfixed but he watched as the figure slowly vanished.  Next morning he awoke and on inspection little heaps of soot lay at the base of the fire surround. He knew what ever it was was wanting him to inspect. He  placed his hand around the iron frame and twiddled his extended fingers but to no avail his arm not long enough to reach much further than the cast iron arch allowed.

In the kitchen lay breakfast and William black soot all over his arm was told to change his shirt. He told his mother the story and she decided her son was not lying. So in the market that day Mrs Mary Whiteside asked of Miss Delores Smith , a real gossip , who had lived in the house that was theirs now. What came back was rather an explanation to what William had witnessed.

The house had belonged to Thomas Padmore a miser who with his wife loaned money at high percentage to selected peoples. Padmore was a secretive man and his estranged wife was hardly ever seen abroad. They loved in fear of the many thieves that lurked In alleys until dark. When Padmore had died in 1904 his body was cremation and no money was ever found. His wife had died the year before him.

So Mr. Whiteside took the fireplace in his boys bedroom down and on a ledge inside a tin box blackened with soot fell out. Inside was thousands of pounds all crisp and dry with the five or six attempts to lite the fire.  Nothing could be done and only what lay in the middle  could be saved. When taken in hand carefully it amounted to about 40 pounds .The rest, perhaps 5000 pounds, was then to fall to ash.

William never saw the ghost of the miser again.

Thank you for reading my work. Sir Kevin.

2 thoughts on “The fire that would not burn”