For those who know he was Blackbeard the most famous pirate in British history still how much do we known? Was he really a pirate?

The man was born in Bristol England around end of the year 1680. He most likely attended Naval College in London as otherwise how did a 20 year old handle a ship as he could in truth.

The first real clue to what went on in his mind was naming his flag ship, “The Queen Annes Revenge” 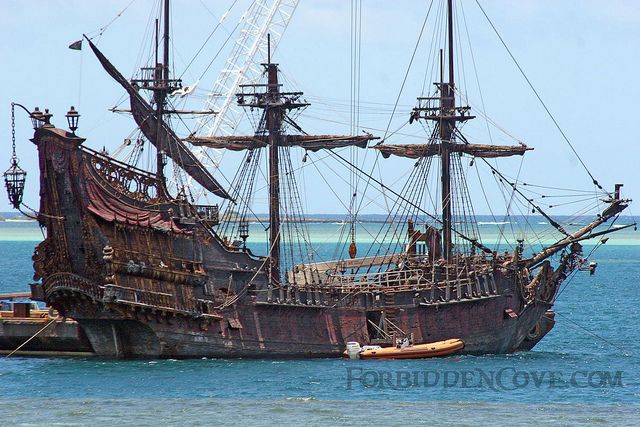 Blackbeards flag ship The Queen Annes Revenge afloat after rebuild but perhaps with much license to be historic  true.

As a British Navy man he went  not noticed in his duties even so. At end of Queen Anne war he joined with Benjamin Hornigold in selling captured shipping. A trade that many entered. Hornigold in 1717 gave as pay a captured vessel for him to make his own way in life. Seems the two men parted friendly. Naming this big war ship as said in the Queens name is paramount in his job as spy and raider for gold for Queen to enjoy.  He may ,or may not have had Royal permission. That question is kept secret for obvious reasons if so. I do not believe it was more than secret even so,unlike the open fact that long before Elizabethan sailors did it in the open.

To be a privateer he needed a loyal crew. To keep them loyal he had to pay them well. He hit on the idea of being ruthless in leadership if just a little mental to set the fear in them. He had tapers for the gunpowder in his guns tied into his black beard and kept them smouldering ready to use on his best deck guns. What he did in truth was set a fire of fear within the crew. They began to serve him with respect and loyalty to a man. He became the most feared seaman in history of this world but was he really a pirate or more a Queens man.

Blackbeard soon set a record in fighting crews of captured ships and was even pardoned by the Royal ambassador and Consul one Governor Charles Eden who on Royal pardon parchment handed it to Black beard and crew and after they ran a ground on sandbanks  near his house in New Wold. He even had rooms in the Bonner House and as it was 1718 he tried to settle down and reject the sea as a free man. Queen Anne was dead he had no more the heart to carry on in her name. Gov.Eden, a gentleman, too was dead and now the replacement Virginian Alexander Spotwood took office  he saw Blackbeard as a pirate in his waters and sent two sloops of armed militia out to The Queen Annes Revenge at night. The crew at sleep and the night watch drunk or missing caused a fight with pistol and Cutlass.

Blackbeard killed a few of his assailants but was shot five times and still forced the fight to him. Almost exhausted they cut him down and severed his head .This they fixed by ropes against the ships figure head. A wood carved figure of the British Queen as what these murderous settlers thought of the British is echoed in this singular action.

No record tells of what became of the body of Blackbeard .It is most likely it was thrown over into the crocodile  infested inlet. 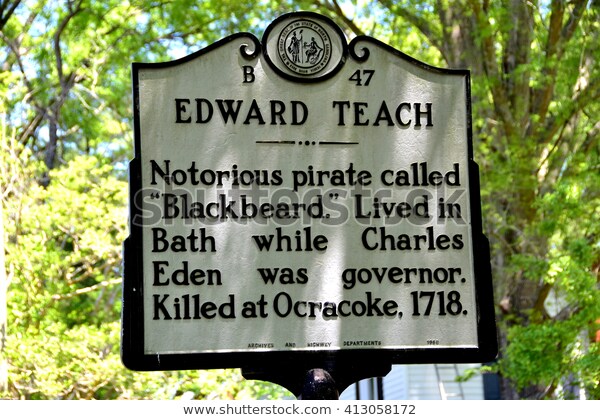 It was murder of a Royal graciously  pardoned group of men . Spotwood walked away freely with it. Then all called his victim a pirate.

The mystery of his ship came to be in 1996 when in 20 feet of water in what is now Fort Macon State Park in Oracoke Cove it came to light. North Carolina territory so did Spotwood even have Jurisdiction over raid in another state than his?

We have many ghostly tales of Blackbeard in sightings in Archbell Point lights are said to be seen in storms and have come to be known ,for tourist trap, Blackbeards lights.  All Blackbeards crew died in that last fight and as over half of them were English one says it was murder deep and evil by a coward who crept in under cover of night to a pardoned crew and leader.  It would be interesting to see how much went back into Royal English coffers from Blackbeards privateering? I expect no trace will be found. That will not mean it never came to be.

He had not been seen in this light because of Spotwoods cover up until now. I do this to clear the name of a loyal soul who served well his Queen. To call him pirate is to bring in Drake and Raleigh and Frobisher and many many more and call them pirates too. That my readers is to change history now. Blackbeard played a part in our history and why pardon a real pirate with Royal papers should then be seen what Teach really did. Drake was a man who navigated the world going anticlockwise because he could. Raleigh fought the Spanish who had stolen gold from the Inca and Maya natives of South America and then handed much of back to Queen Elizabeth 1 to help her in war. Blackbeard served another loved Queen of England and in our hearts we would so again for Elizabeth 11 and England. I think what ever Teach did, he always had loyalty to his Queen.

Thank you for loyalty to my blog, yours always Sir Kevin.

4 thoughts on “Was Edward Teach as bad as history paints him?”