It was April 1902. London was full of travelers and the warm sun had brought out many pale people to revel in the glory of that day. None as pale as the body on the Coroners slab.

” My verdict is drained of all blood and liquid. Dry as the bones inside him. ” Barked the man who knew the dead so well.

‘ Unless he drained himself,Id say yes. Over to you now Inspector .”

The body belonged to one Phillip Pardo a doctor in Sherpards Bush area of that said city.

Three days later a body came to light in the Thames river . Drained of blood stabbed in the heart .In the water just 2 hours. Found by a boatman who hit it with his oar.

Over six weeks 3 more copses were found by police .The last one, Mister James King a silversmith in Oxford Street aged just 34.

“Right ,we know two bodies found in that house so as it backs on to the river one must say that it is the certain place to start today .”

The sixteen policemen saw that Inspector Carl Davies meant every word. Suddenly the station was empty of voices. The Coroner sat down next to Davies.

‘A rare do this then. Seems to me its someone who sells blood to hospitals.”

‘Checked all last week. Not one without an alibi. Could it it be more than one person.A gang .Such as that case I did years ago. ”

‘You mean the Gitting case . Oh! not as cruel .Didnt she boil them alive?” Gasped the Coroner.

‘Sickened me. Case I will not forget. Poor sods, just kids. Mental; she was the Devil they called her.Dead and burned these many years.”

Over at number 134 Cherry lane the house empty save for a mirror more suited in a dress shop reflected the light into the eyes of the incomers. After a search lasting four hours only the fact that the back door led through a small yard onto the river. It was clear that at least one body was set into the water there.  His wallet was  found flung into the coal heap onside the small  brick shed. Not only that but the small foot imprint of a womans foot in the coal dust. A cast in plaster of Paris was made and all returned to the police station to write  all up as record.

‘ So mister Pardo was just leaving work after being paid a wage. Yet nothing was stolen from his slip is right for the amount in his wallet.”Said the Inspector.

Time was not on police side as the top lot wanted results and newspapers told of incompetence on police part.

All connected with Cherry Lane had been rounded up and one by one released that is until Davies came to an elderly woman who interested him so much. The lady was Italian around 60 with lively blue eyes that fixed him to the chair. She gave her name as Mrs Silvia De Natas  and left the Inspector powerless to speak for some minutes afterwards.

‘ I feel rather silly but that woman is not right. “declared Davies and all looked up.

‘ We saw her this morning but she was ill she told us .We thought her over 80. ” Cried the second officer. Nodding of heads in agreement gave birth to the Inspector sorting her name out in his head.

“Silvia, De Natas is Satan backwards. what the hells going on. Harding go and fetch her back she cant have gone far.

Davies waited until way after dark but PC Harding did not return. Next morning his lifeless remains lay on the Coroners table drained on blood, whiter than snow, his face and hands.

‘My God Jacob”  ,cried the Inspector taking off his hat and coat.

“Yes you may say that. Poor young fellow was found slumped over a barrel of best bitter beer outside of the Bird in Hand Arms public house at 5am this morning. Still in uniform.

“Right all you lot, armed .Come with me and find that old woman for somehow she is wrapped up in this. ”

A thin blue line of men marched across the city and into that house in Cherry lane. Deserted but on the floor near the cellar door lay a policemans wooden batton.  On closer inspection his note book in the dust. No sign of a struggle and not a drop of blood to be found.

‘Find that old maid she is around here someplace. For hours they torn the place apart then behind a wall of sliding panels they found a young lady naked in a bath of what looked like milk in a bathroom of marble pillars. Out came Davies pistol but she stood up naked and asked for a towel. As beautiful as anyone had seen she smiled. ‘So why are you all here in my house?’ Her lips just pouting.

‘ And who are you pray tell?: demanded Davies.

She sat down half covered transfixing the eyes of policeman. Davies not so taken in. He saw her blue eyes and felt them hold him but could not as he was so aware. 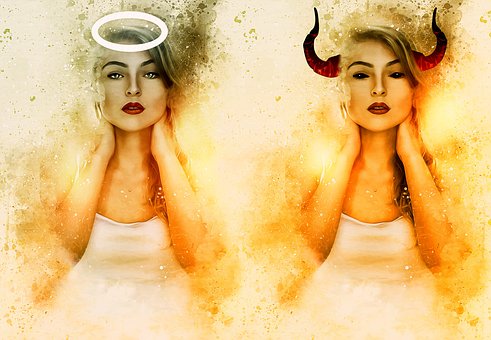 “I tell you that I know you now. Years ago in Italy a beauty called Bedricca Rappuceni attracted victims into her fathers gardens .A walled affair indeed. Her father took their souls in order that he could be young for ever. ”

“It is but a story dear Inspector. ” she was playing with his mind and he knew it .His eyes looking at the fireplace not at her.

“Do you kill the innocent to be young. If souls are your thing Satan why drain them of blood. ”

” So maybe you think you have found me out. Pray sit down with me”

‘Oh! not likely. Only that you are not her daughter you are she whom I interviewed yesterday who looked 60. My men told me when they saw you 80 was their guess. Rejuvenate each killing do you. 18 now at most today”

He turned back to her to an empty chair and a towel on the floor. Not one policeman took their eyes off her but she had gone from the room in full view not seen.

The case was never written down nor did they ever see this woman ever again but in his mind Davies knew her real name was -death . It was not his time to go. No more this story tells. Other than that Davies died a natural death in 1927 but his son knew that death had entered his fathers  room. The fear on the old mans face told him she was there with them.

Short story again. Sir Kevin says thank you for bothering to read it.