A silent lane where once a rail way ran. Just a station in the rural Oxfordshire countryside. A one time main archery to London. Today it is so. For Sam Harlow long ago it was destined to be the last place in England he would ever be.

It was June the 21st in the year of grace 1913. A subscription dance given by the council to the locals each year. From across the floor Sam Harlow cast eyes on the love of his life. He 18 years of age an apprenticed joiner at the firm of Peters and son ltd. She the daughter of the Earl of Dean. Two worlds apart but here no barriers existed just a country dance by invite and membership. Sam asked, she marked her card and he was forth in line to take her hand in a slow arrangement by the band. His ability to hold her impressed the Lady Edith but for her it was as for all just a dance and when it came to an end she thanked him and took her leave. He had fallen for her, a prize too high .She was back with her friends ,he alone and unable to venture forth as now the Earl and his wife appeared to escort the Lady Edith home.

In his heart he thought how lovely ,kind and impressive she was. He knew how hard it would be but would not give up on loving her. For the Lady Edith he had faded into the day before and gone from mind.

Six months later Sam was at this rail station wearing the uniform of the Oxford pals; Engineers ready for France to fight the Hun. It was from here at this station that he last saw England. In his pocket he carried the newspaper photograph of his love after being flung out of the Earls gardens by the bailiffs as trespasser twice during his efforts to win her.

He loved her more than life by now but she did not even now his name ,nor did she care what it was. She hardly knew him and had put him out of her mind that night after that one dance.

The Front.  Mud filled, rat infested trenches, barbed wire fences, rolls of the stuff laying wildly all over. Whistle blows ,Over the top  and machine guns knock the life from the lads. Fast to fall ahead all the way to be cut to bits by gun fire and cannon. No place for pity just try after try to take another 12 feet of land. Sam survived the hell that was the Somme and found himself laying on a field kitchen table being cut open by the surgeon removing metal blastings from his arm. He came too to see her smiling down at him. Lady Edith herself taking his hand. It was not a dream .She a nurse volunteer along with many others good ladies from England who cared. She was puzzled as she could not say she knew him. In the days leading up to her ultimate death he was recovering fast unlike the poor injured helpless each side of his bed. Screaming and upset as many who would not walk again understood what pain was. Some dead within that singular moment. 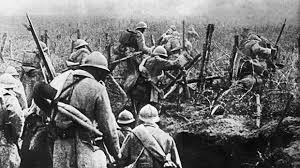 He was up but in no mind of his own as  that gun was still firing in his head. Lady Edith tried to hold him back. He wanted to kiss her and he placed his blooded hands around her neck to pull her to him over the narrow bed and in that singular action he broke her neck. Limp she went and he grasped her in his arms pulling her to him.

He was sitting on the bed with her body over his knee sobbing when the Red Caps arrived guns drawn to arrest him. Sams mind was back far away, guns blazing, dead all over him, when they took his wrist he fast as a flash, removed the pistol from the policemans hand; put it to his head and pulled the trigger. For him that gun finally stopped firing for  he lay dead on the earth floor of the tented ward of beds.

The rows of white crosses stand mute in the sand .A grass lands of death mark the spot where some 8 million lay.Then not Sam Harlow even though he was a brave soldier his mind had gone and Lady Edith made it worse for him in rejection. This is what he thought but he had no wish to kill her. In his daze the mind leaving him his action was to hold her only in human warmth. Lady Edith was 21.  Poor girl lost her life serving as a field hospital orderly out of her compassion for the soldier at war.It cost her her life through fate.  Her cold and stiff body was shipped home to the family vault. Sam to the trench marked for fill in within reach of the tent flap door. War was over four days later.The trench is still there to see today as it will be for all time. Just outside of Paris past the great Cathedral of Rhiems about an English mile.On the right hand side of the road before the tree lined parade.  It says clearly on top of the mound over the trench. ‘The glorious Gloucesters held this trench. They hold it still.”

A sad story I agree .Mistaken love and gas in the lungs  the Devil at his work. That rail station was closed years ago by Doctor Beaching and Government mistakes. Some nights when the moon is in the sky riding the clouds like a ship on the sea and the wind is in the east to fill the sails .The ghostly voice calls out above the trees and through the deluge in the dykes you can just faintly hear it call.” Edith. ” As the blackbird sings from his pulpit a sermon to the parting day. No more than that but a chill runs down the spine of those abroad on nights as this.

Farmer and tramp alike  know well.  Walk to that old rail station even in the day light is just as bad as all the time your feeling is Im being watched by unseen, dead eyes. Perhaps beyond that curtain a soldier may be just as lost as all those years ago he was. We know nothing until the time comes when all questions will be answered.   A time when we are selves will find rest .

Thank you all for reading my story.

4 thoughts on “The last dance with life.”