Dark the night high the moon over the heather lane. The detective sorry he had not changed the bulb in the flashlight hand torch. Dimly he picked his way as a man lost in a dark cellar hugs the walls.

The Queens Men public bar was the first place he called at.

‘You look done in sir. On foot on a night like this?”

“Car left in next town car park engine failure. Anything to eat here?”

“Closing time in ten. I can ask our cook for soup and roll but thats about it”

“Lovely make it with butter if possible.”

The bar man marched off to the kitchen door and vanished into the affray beyond.

Just then Detective James saw he had a signal on his mobile and rang his desk hoping someone was working late in New Scotland Yard. He need not have worried as that someone was Detective Constable Harris.

“Lower Slaughter Harris. One mile outside. I am having a bite to eat in a pub so can you send someone to the car park behind Police Station there as car engine packed up on my. Where ?No  Cotswolds area. Why?  Harris I was on my way to see Sir Andrew Barber at Chambell manor Worcester.”

“Your soup and bread and butter sir. Its carrot soup sir .Everything to your taste?” The barman handed the tray over.

‘Thank you, many be a glass of dry red wine to wash it down seeing Im not driving tonight. Alas. ”

“What ever you have mister? ”

Harris rang back as James took to spoon to soup bowl. “Yes Harris. ”

“Roger that sir .Nothing in your tray Ill inform command in morning.Good night sir”

The soup he enjoyed the bread stale but he decided a bed would be better and was lead to a room above the main lounge looking over the fields of middle England.

It was therefore after a good hearty breakfast that James hired a new fiat and drove down to meet Sir Andrew at his old manor house front door.

‘So your the fellow famous for ghostly events . Im Sir Andrew Barber. Come in. ”

The purpose for this meeting was Sir Andrew as brother in law to Chief Constable who as boss to Detective James department had asked for help.

“You say a ghost stood over your bed Sir Andrew ”

Old place like this can seem so ghostly could it not have been a dream?”

” No it was as clear as a lamp shining and face of a woman all white and pale .Not a thing to recall but cannot get it off my mind.You see I knew who it was.”

“You knew her?”
“Indeed I did.My sister Eveline .Dead these last 12 years.Cancer aged 40 took her you know. ”

“Yes sir  I drove my boss to the funeral at Saint Oswalds churchyard near here. ”

“Look old boy I had not touched a single drop that evening she came to me. ”

“No but she handed me this note?”
” A literate ghost what ever next.” 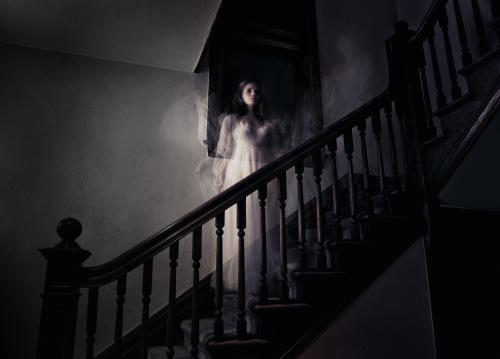 “You can mock if you wish young man. Here read this.” He took up a paper from his side table and handed it carefully to the policeman.

“I see. Short and sweet. Take your self to Atlade and pay for your sins. Atlade sir?”

” A ridge looking over from my land to the dell beyond.”

“Have you been there since sir?”

“No. legs not up to that. Stick in soft ground after so much rain you see no good.”

” About a mile as crow flies. across the moor is only way from this house. ”

” Barley a foot can find a path across the mire.”

“This weather indeed more than wet lands suck you in like worms.”

” Rather take you up to my room than walk to Atlade John. ”

So it was that John James entered a large wood paneled room with a stone mullioned window bearing in stained glass the arms of the old mans family. The room dark in all corners but no board creaked under his foot fall.

“It was here I lay and from that door she drifted to me.I was in fear but she brought a skin and bone arm white as cotton sheets from inside of lowing silk gown and handed me that note. As I took it, dazed  was  I ,she drifted backwards into that wall.  “He pointed out to an oak wall in six large panels. A great brass lamp with six shades affixed to centre place.

James tapped at all panels and side timbers but the sound assured how solid that wall was. It was then as he gazed at the carpet were a slight depression took his eye.

“What is it John my boy.” Cried Sir Andrew.

‘ Cant say its anything.This depression have you moved a chest of drawers from this wall recently. ”

“Not to my knowledge Chest on chest 1670 against that wall. He lazily pointed across to the opposite wall. James then looked at the feet .Great solid balls under the cross beam told him nothing. He searched for clues but nothing came to light .Then as he walked to the door to leave he felt a chill come over him and as he looked into the corridor a ghostly figure peered back at him from the far end. For seconds only and as he blinked it vanished. Onwards he ran to that spot but nothing came to his hand to say anything was wrong.

“So we both saw that Detective did we not?”

Thank you all Ill make it worth the wait.

2 thoughts on “Detective John James at the ready”