Morning had appeared over the hill the golden sun came bright and warmed the face of young Taria a man laid out in the sands of wild  desert expanse .Far from his home and  still feeling the lump on the back of his head he rose frozen only for the warmth of the sun now he may never have woken.

The road to the town of Parbhani was another three days on foot from him. He felt weak but faced the now burning sun . The sky already turning purple as rain was hoped for soon. He had set out from the city to deliver a baby and after successful birth he had taken his leave to go home to his wife . His motor cycle was no place to be seen then suddenly he felt the heavy weight on his head and no more.  Some how he had been taken and dumped in the desert by unknown hands. That lump on his head was painful but he edged on with only his handkerchief over his head knotted each corner to keep it on. his leather medical bag was also missing. It had been the gift of the people he had served since leaving medical school in Delhi. 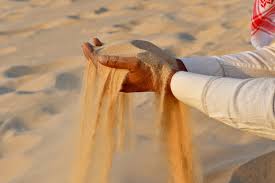 The Indian sun beat down relentlessly he could hardly see ahead, mirage after mirage puzzled his eyes. Then he swooned and hit the sand heavily. Above his still body black shadows flew in circles after food. He lay many hours and woke cold and wet with sweat. His head banged, his eyes hurt but it was cold and he marched on until the hard road surface connected with his bare feet. In time a vehicle stopped and picked the man up. On hearing the strangers tale the driver was a mechanic who had been asked to start a motorbike as two men from Lahore had lost the key. Doctor Taria Pandit now asked the description as he himself had wired the bike to start only be key. The driver thought hard as at that time he had thought it strange. By the time they reached the town gates he had written down the half remembered registration . Taria was now sure it was his machine. No medical bag was noticed by the driver but even so his description of the two men matched with his memory of two men he had seen at the birth and were uncles to the baby born. He had now a starting point but first must find his wife. His loyal helper, wife and dearest lady, was opened armed so frantic and worried over him it was some time before she learned the truth of his time way. Bathing his head and with hot towels around he fell asleep.His wife slipped out to inform her brother of the news. He sat at his desk as chief of police taking it all in.

It was afternoon of the following day that Taria awoke, his medical bag on his bed side cabinet. It was joyous to see it again and he leapt from the bed to find it empty. His tool and medicines all gone.The newly purchased stethoscope  too had gone. It was while he sat thinking, bag on his knees, that his wife arrived with teapot and two cups  on her best tray. He smiled but opened and tipped up the bag to show it void of goods. She nodded slowly knowing all.

His wife no stranger to life put her hand on his head softly, caring and said so gently that she loved him no matter what. He looked up at her with moistened eyes and nodded his head into her arms.

It was as the burning morning sun came over the garden house that Taria looked from his window to see many people calling him down to see them. He sleepy headed opened his front door to all the village who handed him a canvas bag. Inside ,to his astonishment they had given him new tools. He was told that all had clubbed in to help him as he could only help them if he had tools for the many illness about.  His wife at his side,all knowingly ,smiled . Doctor Taria was back again as doctor to all.

From the bushes a man stood watching .His head down, his hands at his side ,his guilt hurting him .Slowly he walked away sad and alone his bottle in his pocket bought on the proceeds of the sale was all he had .He was so angered at his need for whiskey that he failed to see the car, off the hand brake,       before it rolled over him. The doctor was rushed to aid him but found he was too late.  Too late for that man too. Then Taria would never know he was with the man who robbed him.

Short tale of greed. Thank you all for reading my work. Gavitar new comers a big thank you for joining us. Welcome. Sir Kevin.

One thought on “The gift of love.”